there's something about Vans.... 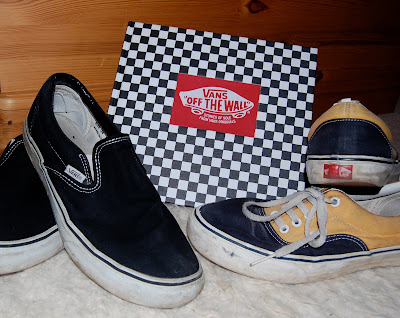 The Shoes i mean, not the utility vehicle!
Not many of the "big" name brands in freesports have managed to maintain their core following and avoid accusations of selling out to "the man" yet Vans shoes somehow have. Despite now being part of a multinational that owns North Face and several other household names, Vans has still managed to keep itself grounded and stay true to the sport that it's been involved in since the beginning. Vans are still seen as one of the shoes to have if you skate (no mean feat in the fickle world of skate fashion), still sponsor a team of ripping skaters, still put a huge amount into the sport at a grassroots level, building parks across America, still produce stylish, comfy, durable shoes.
Ironically they weren't originally conceived as a skateboard company, they were a small family business making shoes to order that saw an opportunity to get involved with skateboarding after requests from the Dogtown team (who were just on the cusp of blowing up worldwide) for a shoe built to their specs to skate in.
As the company moves into it's fifth decade they have released a cool coffee table book celebrating themselves. Put together by Doug Palladini it is part history of the brand, part biography of the skaters, surfers, musicians and others who have become synonymous with it over the years (think Steve Caballero, Tony Alva, Joel Tudor etc) and part eye candy, filled with great action photos and pictures of one obsessive's frankly huge collection of the shoes themselves. It's a well thought out volume, with some really interesting stories and facts within it's pages, some of which you'll know some will suprise you. Since it's been around for so long, the history of the product in a way also charts the history of Skateboarding and to a lesser extent elements of the history of surfing, BMX and snowboarding too, all of which adds to it's appeal. It's a stylish package with good quality pages and the cover is inlaid with a red rubber panel bearing the vans logo, just like each pair of off the wall shoes.
I've owned & worn out numerous pairs since i started skating years ago, in fact I rarely buy any other brand of trainer and I know there are thousands like me across the world. If you've ever bought a pair of Spiccoli-esque check slip-ons or slid your feet into a beaten up pair of SK8-hi's held together with shoe goo (remember that?) prior to hurling yourself off the local architecture, you're bound to enjoy this book and it's a good choice if you're looking for things to put on your letter to Santa!
Posted by CP at 08:08

Yep, I was one of the dangerous brigade of kids brandishing Shoe-Goo at every opportunity! Clumsy stuff. I think I ended up with one shoe that was more goo than shoe...

Yeah, I went that route too, but thats becasue my parents wouldn't buy me the shoes in the first place. I had to trade everything to support my skate lifestyle, which often meant second hand vans, for the odd set of wheels/deck. I treasure my Vans Bucky Lasek shoes currently, even if they aren't always the most comfortable.

Half Caballeros-hands down the best skate shoe EVER.

First pair in '89, most recent pair bought '09, probably still wearing in '29 if they carry on producing them!

Van shoes are very good. Some more shoes which are also really nice, I'm sharing with you. Its look very attractive. you must love it, so visit.

I love skate so i want to take vans shoes for this.

great and loverly information is there....i like to add some more...
vans shoes are very modern and latest lifestyle footwear now a days.
If anyone is interesting in buying online shoes then one should must visit Treds.co.uk
you will see good pair of shoes for your footwear.