So in my minds eye this was a cool little set up for a photo of a new addition to the quiver (it's a 5'6 Mccallum Mford just so you know!) All good until i dropped the camera about ten minutes later...... Much of the charm of taking pictures with toy camera's like the holga comes from there cheap build quality yielding quirky images. It also means they are very much basically cheap crap plastic!

So i dropped the camera, lunged for it, nearly grabbed it, watched in slow motion as it bounced off my outstretched hand onto the pavement, inwardly groaned as the back of the camera flew off exposing the nearly finished roll of 35mm to bright daylight...........in the words of the great homer simpson DOH!

Thankfully i only lost a couple of pictures, a few were unscathed and these two i sort of rescued in iphoto. All part of a fairly crappy week where my laptop died taking a load of files with it and i came within an ace of rolling my van but thats another story!

I'm going to write a proper report on the board when i've ridden it more but first impressions are that it's really fun, even in utter junk surf, up and planing early with a really shocking amount of lateral speed with a real positive on rails feel and without the slip slideyness of wider tailed simmons shapes. Oh and it looks beautiful, a real eye pleasing shape with a real organic tactile feel, much like a nice hull has........anyway......

for the daily commute 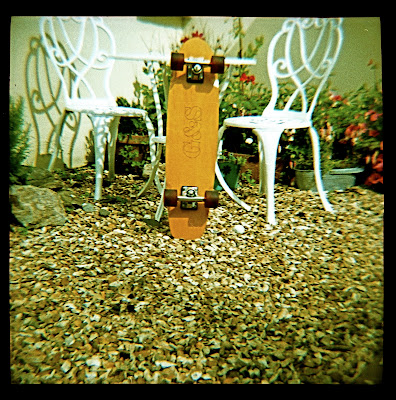 Reissue not original but very sweet all the same, stacey peralta warp tail, trackers and cambria wheels. Loose as a goose and oh so much fun.

Mega thanks to Gavin at surrey skateboards for taking so much pleasure in sorting me out, it was greatly appreciated!
Posted by CP at 07:21 No comments:

There are a lot of beautifully maintained hot rods and busses around california, a lot of occasions when i wasn't quick enough with a camera as they drove past. This beautiful splitty resides outside the main hobie store in Dana Point most of the time though so it's an easy target.

This weeks essential reading is "uncle Skello's what's hot and what's not" published every thursday on the Gulfstream blog. Everything you need to know to chart your way through the sartorial and cultural minefield that is staying cool,

Possibly the best laminate ever!

Ride report to follow soon but this video pretty much sums it up....... 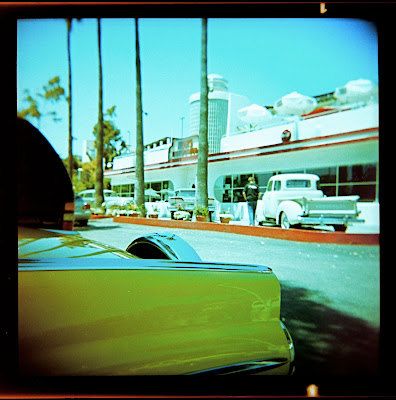 So Ruby's is a chain of classic american style diners that are scattered along the coast. They are based on the stereotype we all have.... red vinyl boothes, waitresses with 50's make up red gingham dresses and white pumps, malt shakes etc. This one in laguna has some period correct cars out front too. Sounds kinda cheesy doesn't it? But you know what, it's fun and they make superb burgers!
Posted by CP at 07:23 No comments:

you know he means it

I have a few cherished surfing memories that i hold on to, a couple down the coast, a couple overseas. One of my favorites was watching Skip Frye surf his local wave at Tourmaline, from the beach and the line up. He exudes class, ocean knowledge, positioning and an understanding of trim matched by few world wide. His lithe movements belie his age and i can only aspire to surf half as good as i move into my dotage. The pic above is actually Rincon (another place of memory) and comes from Andrew Kidman's "Lost in Ether" book which is what this preamble is buliding to.

It's a beautiful film and book project and like all of kidman's work is something of a gem. It's probably best described as a love letter to the art of surfboard building, particularly to the backyard tinkerer's and surfer/shaper/wanderers, often at odds with the machine of the "surf industry" following their own trip and enriching our collective cultural experience as a result.

Thos posted a great review here and so i'm not going to go into huge detail because i think he nailed how i feel too. If i have a criticism, it's just that, like litmus and glass love, it sometimes feels a little unfocused without a distinct narrative but that doesn't interfere with my enjoyment.

Something that does come across strongly in all of Kidman's output, this being no exception, is how much he really means it, from the minute questioning of rail and bottom theory to the handwritten thank you for ordering note in the envelope. Much like the shapers he features, Kidman himself is something of a wanderer, a deep thinker, often railing at the percieved status quo. His work often questions more than it answers and through it all is a feeling that he cares passionately about surfing as an entity, and not in the business or conventional sport sense but as a way of being. He's someone who has frequently put his own money where his mouth is and as our "sport" becomes more and more integrated into the mainstream, people like Andrew become more and more important to help us hold onto what makes surfing so special for so many people. I'm sure he feels like he has a responsibility to almost "curate" and preserve and celebrate that which the industry machine ignores as not commercial and more power to him for that.

I'm sure he will never read this, but thank you Andrew!

The latest paper issue of Corduroy Lines magazine is available to order now. It's a limited numbers, no advert issue and features, amongst other things, some of my ramblings. 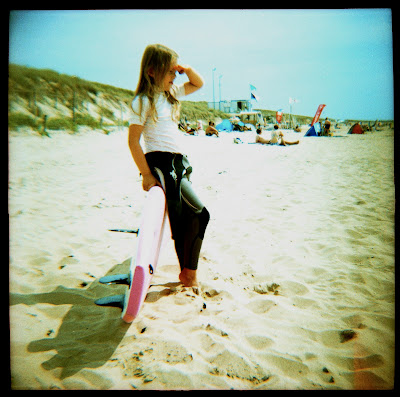 Still one of my favorite surf films and one that still stands up (in my eyes at least) to repeated viewing. I'm an avowed Tmoe fan and it's difficult to underestimate how much watching my original VHS copy of the seedling back in 1999 shaped my surfing aspirations. 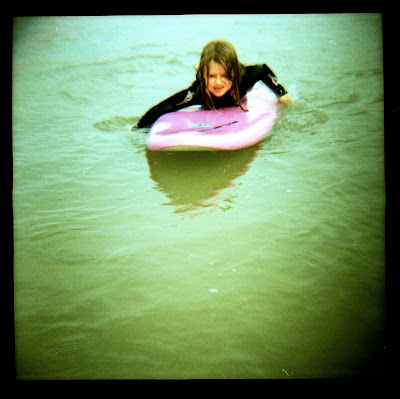 Both trips to California, i've spent a fair amount of time surfing at Doheny, mostly because it's convenient for a quick session before family duties.  It's a measure of how many quality waves there are on this stretch of coast that a spot like this is relegated to also ran status. Yeah for sure it's not killer Dana and it is a bit mushy, the preserve of longboarders and the butt of surfer magazine jokes. The truth is that with some sunshine, a little south swell and a log it's a really fun wave with a mellow friendly local crew who are happy to share a few sets with a traveller.

If you own the extras disc for one california day, it's the wave where tyler warren is surfing his 11 footer., take a look and you'll see what i mean. I'd trade our average local conditions for consistent waves like that!
Posted by CP at 06:49 No comments:


In the Morning from Frankie Davies on Vimeo.

Mike Lay cruising in deepest west cornwall. Mike is another of the Young crop of stylish loggers from the Sennen talent pool riding Rob Wright's slide 65 boards. Looks like it's working for him!
i'm guessing a lot of you are reading this with sore muscles after gorging yourselves on a week of fun waves, i certainly am. With a decent quiver of boards to choose from, there's always a sneaking suspicion that you brought the wrong one to the beach, but not this week. The last few days i've put a few more hours into learning to make the bar of soap fly and let me tell you, its well worth the initial rave i posted. Its such a fast board, i honestly think that despite being only 5'2 it's the fastest ive ever been on a surfboard and with that short rail line engaged it glides through the sweetest roundhouses. The mini simmon's family of boards are ridiculous fun and well suited to our waves, it kind of suprises me there aren't more people riding them yet!
Posted by CP at 06:32 No comments: