At last! i have been surfing and i am really pretty relieved i actually still know how! Really fun to have a couple of small clean logging waves, especially in the sunshine at the weekend. Extra rubber is definately not helping how un paddlefit i feel though!

Yesterday was cold, grey and properly felt like winter. Difficult to leave the house with the prospect of a damp wetsuit in a windchilled car park but well worth it. Couple of fun ones and good to catch up with some faces i haven't seen or a while. Mr Bott was styling as usual on his new bing (levitator) hopefully i can try it and report back soon!

The rest of the week looks small and clean, i just need to work out how i can squeeze time in the shortened daylight hours!

As you head north, the trade off for shorter days is witnessing some beautiful sunrises and sunsets. Fingers and technology battling the below zero mercury
Posted by CP at 08:30 No comments:

So, first film through the lomo lc-a came out, making it an utter ebay bargain at a tenner when they regularly go second hand for £60 plus. Slightly weird having to factor batteries into the equation when taking it on a trip and it didn't like the cold that much. I lost out on a couple of beautiful landscapes because the minus temps killed the battery. Not a problem with the mechanical holga or diana. That said, i'm really happy with the results!


The thing that struck me this year, and it's obviously a personal thing, is how devoid of stress snowboarding is, how much  pure enjoyment without baggage. My days of scaring myself over big kickers are gone and given the confines of family snowtrips, the chances of getting to stray too far out of bounds and into harm's way are slim. I'm proficient enough to take most things easily accessible from a small resort in my stride and experienced enough to slot back into the groove after a long break fairly quickly.It's instant gratification with little effort.


I've snowboarded a lot longer than i've surfed and i've seen snowboarding grow from the fringe, frowned upon, poorly equipped pastime it once was into the corporate run bona fide sport it now is. Many things have changed over that time (17 years, kinda depressing when you type it!) but one thing hasn't and that's the pure fun of riding powder.

For th un-initiated it's like taking the essence of swooping around on a perfect rippable wave and adding the ability to repeat as desired without the effort of paddling or relying on so many fickle elements falling into place. It's effortless weightless floating, swooping, slashing, playing out your every curren/slater fantasy on snowbanks. Racing friends through trees like speeder bikes in "return of the jedi". Cold shots of snow in the face making you feel alive as you power through the flakes still in the air from your turn before. It's the quiet that the woods and the poor visibility the heavy snow brings, the resort empty as fairweather types stay inside, your board swishing along, no louder than your breath steams out. It's big smiles..........................

Setting off for london today on my way to the north of sweden for a little snow fix. I have my thermals packed and fingers crossed the minus temps will bring a little of the fresh white fluffy stuff and i can break out my craig kelly arms / live out my slater fantasies on unsuspecting snow banks!
Posted by CP at 06:46 No comments:


Plenty of you will have come across the names Tommy Guerrero and Ray Barbee on the music credits of Thomas Campbells surf movies, fewer of you will have recognised their names as two of the most influential street skaters ever. I was listening to one of Tommy's albums the other day and it struck me that they are the point where most of my interests collide, surfing, guitar, skating, music...

The Video part above is from "Future Primitive" and it was the first section of  american skateboarding i ever saw, it opened my eyes to what skateboarding was about, not long after getting my first board, sometime in 1988 i think. (although the film is from much earlier) It's actually held to be one of the first catalysts that kick started street skating as a "thing" distinct from ramp skating which was the dominant force within skateboarding at the time and it was massively influential, not only to skaters. If you think about it, the way good snowboarders (like nico mueller for example) ride the mountain, using natural hits as they flow top to bottom, it connects in a straight line back to Tommy ruling the hills of San Francisco. TG was my first favorite skater.

Fast forward a year or two and Powell Peralta released their "public domain" video. In this age of readily available web content it's difficult to explain just how exciting waiting to see the new powell video was, they were almost the only company making films then and virtually the only chance to moving pictures of skateboarding! Not far into the film was the black and white "rubber boys " section set to a classic skate punk track and featuring a young ray barbee. watch it here. One of the coolest things about this section was the flatland tricks (no comply's etc) that didn't need classic american urban architecture for us to emulate. I actually snapped the tape in the badly copied video of this film i had from rewinding and watching it too many times. Barbee is also significant in being one of the first african american skaters to become widely known.

So neither TG or Ray Barbee surf but they do know Thomas Cambell, part of the "beautiful losers" art scene and who originally worked as a skate photographer before becoming widely known for his art and surf film making. Through releases on his galaxia label and his use of their music in his movies,  both have begun to become known for their music as much as their contribution to skating.

Of the two, it's probably Barbee's clean bright jazz influenced noodling that i come back to more often. His tone and melody just say sunlight and mellow sunny happy days to my ears, whatever greyness my eyes can see outside the window. There's a pretty good introduction to him here or watch the clip below for a good introduction to one man, a tele, a bassman and a looper pedal! 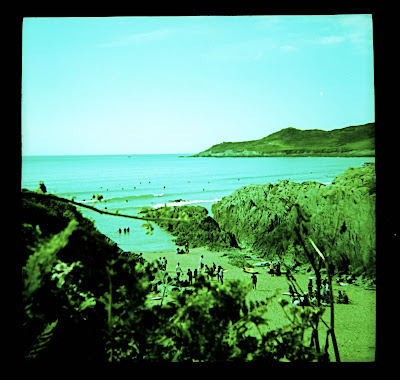 a diamond in the rough
Posted by CP at 08:20 No comments:


Friend of the waxhead and living australian rock a billy legend
Pat Capocci letting those fingers fly
Posted by CP at 09:23 2 comments: