a sense of balance 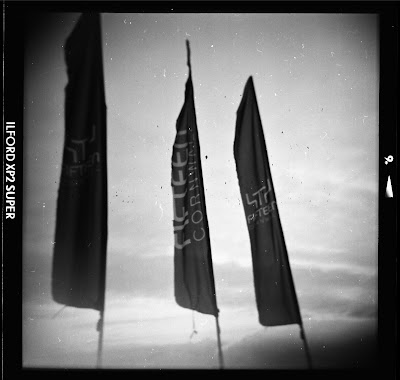 It's been with a certain sense of mild amusement that i've watched the gentrification of Watergate Bay over the last few years. It's gone from being a slightly overlooked end of Newquay to a kind of middle class yuppie enclave where the London set come to take the waters without having to be bothered by the great unwashed masses that clog up the town beaches. Where the farmers market is Jamie Oliver branded and the flats & holiday lets are well out of most peoples price range.
A lot of it is down to the forward thinking son of the family that owned the watergate bay hotel returning home from years in london with some clever ideas to turn the family business around and you have to have a certain amount of respect for his achievements.
Whether it's a good thing or not i can't comment, i don't spend enough time there but it certainly serves as an antidote to the chavtastic chaos that often prevails around Newquay proper.
On a side note, i realise it's completely pointless turning the camera sideways to take a pic when it's a square format exposure, but it was pretty early when i took the shot & the sleepy fuzz obviously hadn't quite cleared, now it spoils the shot for me a little.
Posted by CP at 08:56

Watergate Bay holds a lot of history for me - mainly cuz of the pioneer skatebowl that used to be there way back in the sevs (built by the owners of the hotel). What to say about the place now? It is what it is - development and progress are inevitable. But to my mind it just looks a right mess, the new buildings creeping up the valley just look wrong. However your picture (even though 'sideways' looks great!

The joys of Holga!

Wgate does tend to be full of people unable to park their chelsea tractors, and I'm not really a fan of some of the modern buildings springing up.

That said there are benefits of the development. Although you do have to pay to use the carpark the charges aren't too steep (I paid 50p there yesterday morning), and it is really well maintained. No hobbling over broken tarmac and gravel like at Saunton! There are plenty of bins (including recycling) and the new takeaway on the beach does great bacon sandwiches in eco-friendly packaging. It's definitely a nicer place to take the family than the town beaches.