Bona fide local legend who never seems to feel the cold, always ready with a smile and someone who always brings some fun and aloha to the sessions we've shared.
Posted by CP at 08:00 1 comment: 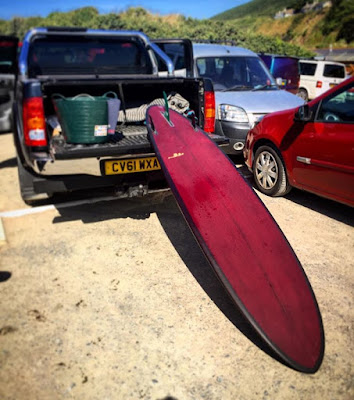 It's taken a while but I've put enough time in on this Gulfstream Speed egg to write a few thoughts.

I really don't like riding modern 3 fin longboards but once the waves get head high, a single fin log gets to be a handful. Obviously ive got plenty of short funky sleds to ride in these conditions but when the saunton line up is clogged with performance longboards, it's hard to get a wave on a shortboard, even if the wave is hella fun once you get one! The idea was to create something with enough length and glide to get in early and compete with the crowd but still be able to surf it like a shorter board without the redundant extra length a prog log gives you. People often confuse eggs with beginners mini-mals or magic carpet style "short longboards" but a true egg draws it's lineage from Skip Frye and his San diego crew through to Donald Takayamaand and Bob Mitsven and is a refined performance shape that will cope with a big range of wave types and sizes

This one's 7'10 x 21 something by 2.6 ish. Untypically vague I know, sorry! Although you'll see this on the GS website listed as one of their eggplant models, in reality its a full custom shape Jools came up with after a long chat on a rainy Friday. Based on the Wild West Shooters Jools made Russ Pierre mixed with the Takayama Howard egg that I own and a healthy dose of shortboard performance design. It's a rounded pin widepoint forward egg with 2+1 fin set up. I'm currently running a 7"greenough 4a with futures sidebites in there which feels about right so far.

It's flat rockered with just a little nose kick and pretty thinned out since I'm only lightweight ( Jools has since made a couple of others for bigger chaps with more foam hidden inside) The rails are a tucked under down rail for most of its length becoming hard around the fins and underneath it's almost a conventional shortboard concave bottom contour. Final noteworthy point is a tail narrower than most off the rack eggs. The takayama howard model is almost an inch and a half wider for example! It's glassed fairly light too.

As usual Jools has totally nailed it with this one. It has good paddle speed and gets in early. Once you're on your feet, it begs a low bodied, fully rail engaged bottom turn rewarding with good projection and then you're off to the races. That flat rocker, concave bottom and down rail yields rapid trim speed in the high line. It's particularly fun to take a narrow stance in the middle and pretend you're Derek Hynd at J bay! Its a board that just feels fast and smooth.

Its length means that you cant just chuck it around like a shorter egg and it definitely likes a small amount of footwork or stance shifting to engage or break the rail line for trim and turns. That said, on a larger wave you can just plant your feet over the fins and go. Once you're outrunning the section and aiming to redirect, with back foot over the fin cluster, its really loose off the tail and wraps nicely back into the whitewater so you can set up again.

Compared with the "classic" Californian eggs like the Takayama Howard, it pumps for speed more easily. Those Ca eggs tend to have a roll entry into panel vee on the bottom which keeps them smooth but tends to feel like their pushing water in slack waves and does nothing to help you race a beachbreak section like we have to do frequently.

Devon Howard has been consistently  preaching that a 2 +1 egg is the perfect one board quiver and I'm increasingly inclined to agree. You can catch and trim small waves and even cheater 5 but still have the ability to duckdive out back on a bigger day. On those bigger sets it will get you in early, cope with your speed through the bottom turn and hold a good line through a section or let you draw big arcs on a softer face. The natural length and glide takes you through flat spots and its short enough to redirect then pump to make the most of onshore conditions. Finally, going with a multi fin set up compliments that natural speed on sub par waves and gives hold in steeper conditions. Single fin eggs work too but single fins generally expect more speed from the wave itself and can lose speed through a turn ( flex in the fin combats this but still...)

The WSL judge contests looking for Speed, Power, Flow. A good egg is the very definition!