This is James, saunton local and a pretty inspirational surfer. He's just as surf stoked as any of the younger crew and probably logs more days in the water than many of them. I can only hope that i'm as active in 30 years time!
Posted by CP at 08:00 No comments:

Super fun weekend catching up with Jules on a flying visit from The North Face, spreading the SeaPea love, careering around lanes on indecisive surf checks and dodging the downpours. Some fun waves despite the wind. Jules take on the mini - simmons experience? "Looks like a comedy board but boy is it fast!"

Out on the bike too, our dry trails are well and truly gone now but getting both wheels sliding at the same time downhill through trees sure gets the pulse racing.

Both on land and at sea, a little but of exploring can pay dividends! 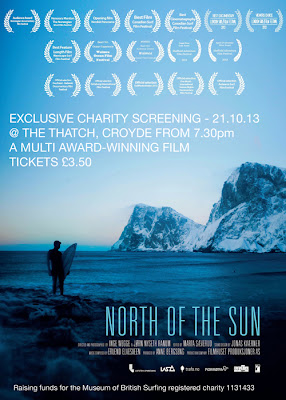 Pete from the Museum of British Surfing just reminded me that they have a surf film screening next Monday at the thatch in croyde. Looks like a good film, hopefully i can make it too!

The Museum of British Surfing is proud to present its latest exclusive film screening – the multi award-winning ‘North of the Sun‘. It will take place on Monday October 21st from 7.30pm at The Thatch pub in Croyde.
We’re grateful to the filmmakers for giving us special permission to show their stunning surf movie. It follows Inge Wegge and Jørn Ranum as they spend nine months of cold, Norwegian winter in the isolated and uninhabited bay of a remote, arctic island by the coast of Northern-Norway, facing nothing but the vast Atlantic Ocean.
There they built a cabin out of driftwood and other cast-off materials that washed up on shore, and ate expired food the stores would otherwise have thrown away. But the boys brought with them two items of utmost importance: their surfboards – perhaps their biggest motivation for the arctic adventure. Because the remote bay holds a well kept secret; some of the world’s finest surfing waves.

This beauty is a 9'10 RON model log custom made for my friend BGA by Michel Junod
Junod isn't a massive name this side of the atlantic but he is very well regarded in his native California both as a surfer and a shaper. He hails from the Santa Cruz area and was heavily featured in Thomas Campbells the present movie which is probably where you have heard of him before if you've been scratching your head!

He makes beautiful surfboards but they are great value because his name doesn't have the worldwide cache of Bing and others. His boards deserve it though. The shapes and finish are every bit as good as other californian prestige brands.

BGA is most definately a fan and has had a few different boards from him over the years. This one came over with Nineplus and is one of Michel's Regular Old Noserider models. It's defiantely got a little bit of a piggy wide point back/ hippy influence but it's more of a full all round log shape than his Pignar or Two tone models. As a result it probably suits our average days  little bit more.

I rode this one the other day in waist high semi-clean medium speed beach break and i was really impressed. I normally dont like long logs, anything over 9'6 and i usually find that the extra inches are a hindrance rather than a help. Not so here, despite it's size, the RON has a nice weight, not too heavy, not too light. It has a nimbleness off the tail (in a traditional pivoty sense) that belies it's size and i found it was easy to whip through fades and cutbacks for me even though i'm only ten stone. The gentle roll in the bottom and nice round 50/50 rails undoubtedly help too.

Up front there's a subtle teardrop concave and perched with toes over it's very stable both in the pocket and when the wave fattens a little. It paddled great too but then there's a lot of float relative to my (fly)weight. BGA is taller and heavier than me and it suits him to tee. His daily driver for the last couple of years has been a 9'8 junod two tone which is a superb noserider when the wave has some shape but at mushy gutless saunton it's not the easiest board to get the best from. The extra width in the front half of the RON gives more forgiveness when the wave gives less and it's flattering his surfing already.

In short it's a good value californian all around log and well worth thinking about if you are in the market!
Posted by CP at 10:22 2 comments:

It's a long walk down from this car park, especially in a keen easterly wind, but it's worth the effort. Funny how it always seems a bigger hill on the way back

Big thanks to surfer dad for his kind words about this and some of my friend's blogs. look here

Gulf stream have a few orders in for seapea's and the first three stock ones are looking beautiful, 5'2, 5'4 and 5'6

This is the north end of Les Dunes 1 near Brem sur Mer in the vendee. It's a really fun beachie, not too dumpy and retains pretty good shape through most of the tide. Busy but nowhere near our summer crowds. I guess it's a bit like combesgate, a nice peaky speed with a long wall, perfect for extended tip time on a log or for flying down the line on a fish when it's bigger. Boardshort temperature water in midsummer too!
Posted by CP at 08:00 1 comment:

There's something visceral about live music. There's a physicality that goes beyond what your ears can hear,  the beat pounding through your body, the energy in the room from the band and the shared experience.

This is city of lights, a young band from Leeds that i stumbled across on a night out in manchester. It wasn't really a night about seeing bands, we were just looking for entertainment in the downtime between two days of courses. We were blown away.

I've seen a lot of bands live, both local ones and big names and there is something special about some of them, an intangible x factor if you will. You can usually tell if they are going to be any good from the first few bars. There's a tightness to the sound and an energy between bandmates that crosses from the stage to the audience so readily that it doesnt matter if you've heard their songs before.

City of lights have it in spades and they are a band that you're going to notice cropping up on the radio soon - they already played the bbc introducing stage at reading and leeds festival. Their five track EP opens with the chiming guitar of "don't give up" sounding like funeral for a friend without the metal edge perhaps. From there it weaves it's magic through intelligent lyrics and melodic hooks and a sound all their own. They are really nice lads too and i hope they have a big future. Click the link,  buy an ep and support good new music that simon cowell has had nothing to do with!