Rob Martin is one of my heros, one might almost say he's a living local legend, although he would hate me to describe him this way. In fact he was pretty reluctant to have his picture taken and i'm sure would hate the fact i've posted it here.
Ever since i moved here, Rob has been a fixture at saunton, on a log and for the last few years on an SUP. He's a good neat surfer with a litheness that belies his age and he's got more surf stoke than most people of half his years.
I really hope i have the desire and physical strength to still be surfing like that when i approach my seventies!

This is the decidedly low tech life guard station at Tonel near Sagres in the western Algarve. In a way this post signifies a full circle for Adventures in Trim since it was pictures i took with a digital slr at tonel and a desire to do something with them that was a catalyst in signing up to blogger originally, that and a desire to see what all the fuss was about as far as blogs went.
The blog lay dormant with a couple of posts on it for a year or so before my friend Tim encouraged me to actually start spouting my strong opinions to the world. By that time i had discovered the holga and the rest as they say is history.......

where the trail starts... 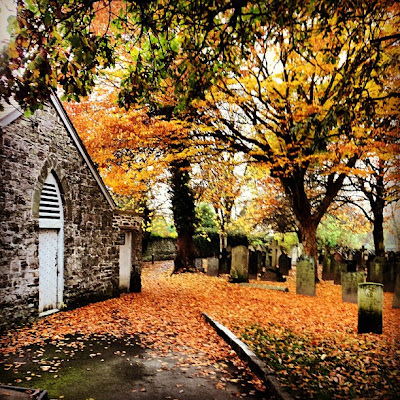 The autumn leaves have been beautiful this year, or maybe i've just noticed them more because i've been outside exploring.
Posted by CP at 08:07 No comments:

I, like many people in recent times, am lucky enough to have a reasonable quiver of boards racked up in the shed, covering long, short and several different schools of design thought. Some are bigger favorties than others and there is a gentle cycling through of boards over the years as my tastes, thought processes and surfing evolve. I dont get to travel far to surf and riding different boards at the same few places keeps things fresh but still local in a way exploring new places does for those lucky enough to be time rich and responsibility light.

So i've usually got a couple of boards in the van and i chop and change them bsed on the forecast and my mood. When i do get to travel is when the difficult choices arise. With the usual luxury of a shape for every eventuality, picking one or two boards for a trip can be a difficult process, fraught with insecurities about making the wrong selection. A fortunate dilemma to have obviously!

Over the years i've come to the conclusion that the photo shows my perfect "capsule quiver". I reckon i can have fun in pretty much anything i'm prepared to paddle out in with a skinnyish fish and a single fin log in the bag. Much as i love the mini simmons i've been riding over the last yearor two, their super flat and foamy nature don't give me as much confidence holding in (or squeezing under) bigger faster waves elsewhere. The GS twinnie above (which is heavily influenced by the christenson school of fish shaping) is slight enough to cope with decent size (for me anyway) bowly waves and still flat and fast enough to be fun in punchy small surf.

As for having a log with you, sure they are a pain to travel by air with but if there are small reeling point breaks (or even small clean beach break) on the agenda then a single fin is a must. My current personal taste being for something a little less bulky and more foiled / narrower than i'd ride at saunton.
Posted by CP at 08:58 2 comments:

ghost in the machine

For the last couple of months i've been borrowing this 5'2 Bing mini simmons from a friend. It's pretty well recorded on here that i'm a big fan of this type of board and the bing version certainly hasn't disappointed. Matt Calvani supposedly put a fair bit of time into refining his design and his version is similar but different to the kenvin/Baugess original. While the bing keeps the absence of rocker and the s- deck, the step is fairly subtle. The belly up front is there but much less severe than in Ryan Lovelaces velo-sim version for example. Bing have also kept the rails thin so they stay in the wave face as it gets steeper and speeds increase. The fins are lovely ply keels with a template closer to gephardt fish fins than Kenvins half moon design. Right at the back, the tail has a slight curve (arctail) and it's 21.5 at the widepoint and 2.5 thick so closer to a fat keel fish than the original Baugess shape in this respect also.

In the water in paddles well and crucially is foiled well enough up front to duck dive more easily than most of these shapes. It gets into waves early and has a feel of a smooth, fast, fish. The very subtle belly roll water entry gives the classic simmons style lift but without the overtly hully feel of the Velo Sim. This flatter contour is most definately noticeble on your backhand and the board feels far less skittery under your heels as a result. There's plenty of down the line speed on offer, both from a high line trim and top to bottom pumps, the gephardt style fins giving plenty of drive but a more positive hold than the half moon template. It's perhaps not quite as "alive" and whippy in feel as the bar of soap i own, probably beause there is less concave on offer through the fins and the wide point is further forward, i'd place it more as like a normal fish with better glide and less carvy more skatey looseness.

Like all mini simmons, it goes great in junk waves, far better than a conventional keel fish. I'd say that this is where these shapes excel. They're great at making average (or worse) days fun, i'm not sure they would be your first choice on the best day of the year, but then we don't get many of those if we're being honest do we?

Although i agree we should all try and support our local shapers, not many people in the UK are making a tried and tested simmons still and the bing version is a very usable in a daily driver sense and less specialist than some that are available. In short, i'd consider buying one if there was space in the shed.

If you don't have young kids is difficult to understand how much of an expedition a simple day at the beach can become. If you do, you'll know exactly what i'm talking about. The beach tent, an essential bit of kit!
Posted by CP at 08:30 1 comment: