After a run of fun little groundswell waves a couple of weeks ago it's back to the British summer time we've become used to, finding the pockets of sunshine between the showers and making the best of the onshores and windswell while the holidaymakers shelter behind their windbreaks and brave the low temperatures in their speedo's. That said, yesterday had a fun little wave despite the onshores and was topped off by pushing my daughter into a whitewater wave and watching her get to her feet for the first time! She's goofy but I can live with that! Big smiles all round in our household last night!
If you're around Newquay this week, the relentless boardmaster's is on which is best described as a mini US open type thing. Elsewhere, there's a couple of interesting things on the horizon...
Fresh from his semi's berth at the joel tudor duct tape in spain ( with an invite to the next one in malibu) James Parry is putting on his own single fin thing. The Hip Wiggling Invitiational Single Fin Gala is at gwithian on the 3 & 4th september and promises to be a beacon of style in a contest season filled with butt wiggling and people attempting lame airs on longboards.
A couple of weeks after that, Royal and friends are hosting the European Fish Fry at Crackington Haven in North Cornwall on the 17th September. Visiting US shapers to be confirmed but it promises as usual to be a fine day of surfing and chinstroking over alternative board design. Hopefully my brownie point bank account will be full enough to release me from familial duties for the day and i might see some of you there! 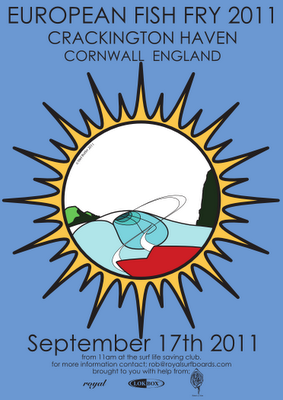