the dirk of doom 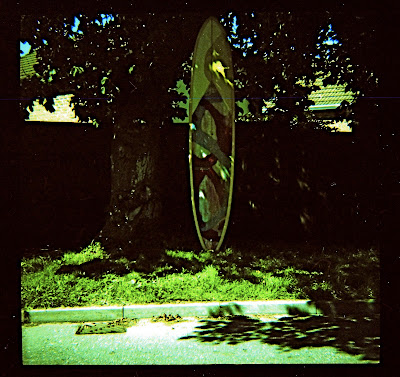 Absolutely not a death dagger.........9'4 x 16 x 22.5 x 14.75 x 2 7/8 by the Squire
A long time ago, in a galaxy far, far away, i ordered a surfboard from a wandering minstrel. I didn't get quite what i asked for. I'm not going to rehash the whole story here, the tale was posted previously and you can read it here. I felt somewhat let down and nervous of re-entering the kingdom of kegel again.
As luck would have it, the Squire who hosted the wanderer did feel that something should be done. After measuring the original in great detail he ordered his workers at seabase to shape a replacement, pulling the original template out to the dimensions i'd wanted but otherwise copying the original as far as possible.
The result is the beauty in the photos, which (apologies to john) don't come close to doing it justice. The tint is ace and the finish really out of the top drawer. It's flat, foiled out with soft pinched rails, a hint of concave, a tiny bit of tail kick and some gentle belly in the back. The fin is a slightly raked volan flexy affair, taken from the original gato board. The proof as they say, is in the eating and however good a board looks on the rack, it's in the water that it's true nature is exposed. This isn't supposed to be a noserider, more of a tool for what we might term the new involvement school of surfing, referencing the surfing of Chonoski  and Knost and friends, who in turn are influenced by Nat Young and friends of the magic sam vintage. Namely pocket noseriding with full rail commited turns in a traditional sense. (i know what i'm talking about even if that's confused you!) It's made for waves with good shape and a little pace but not necessarily size.
In the water, it paddles fine, as well as modern progressive longboard. Take off's are a little late compared to a true log but the lack of nose area helps avoid pearling despite the flat rocker. It trims fast and feels responsive and alive under your feet although it demands quick footwork. Bottom turns have a nice spring off the flex in the fin and cutbacks whip around with weight firmly over the fin. In short, a lot of fun and similar to the gato. Noseriding is obviously more of a critical affair with a 16 inch nose but with a steep pocket forming around you and quick feet the board will lock in nicely. In fact, in bowly little waves, the narrowness probably works in your favour making it feel much more manageable. It trims fast and holds really well on the nose through sections and cheating five while head dipping is particularly fun. It will allow a brief ten over though thats hardly the point of the excercise. It is exactly what i wanted and i feel somewhat vindicated that the dims and shape i originally envisaged do perform how i imagined and ultimately how i wanted. It's definately a departure from most of the longboards in the uk right now, not that easy to surf and most definately not everyone's cup of tea but......... For someone like me who rides longboards a lot but has no interest in the 3 finned variety, it's a really fun departure from the norm.
So there you have it, the best and the worst of the custom surfboard experience in one episode! Big thanks to John Isaac for sorting it out patiently and Phil Hodge for taking care with something out of the ordinary. If you're looking for a new board squire are worth considering. contact john here or here
As an aside, if you have read the comments on the previous post you will see that robbie did offer to swap the board for a used one of his or shape me another (at cost!) when he came back to europe this summer. Perhaps unsuprisingly he's already here (& perhaps gone who knows) but no contact to make good on the promise so far. 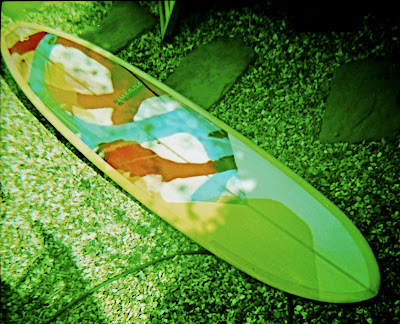 John is a gentleman !

rk shoulda made you another board, the one you ordered, for FREE! Period! there is no room for someone to "just give you" something you didnt order and hope you dont notice...glad it "kinda" worked out for you...

ha! wow, I just posted a comment 10min ago asking if this ever got resolved...the page must of not of refreshed or something. So what happened? you traded it or something for this one?

Yeah a straight up trade. John Isaac who organized robes trip is an an acquaintance of some years and felt bad. He practically begged me to have the gato back and shape something like I wanted. Doesn't really let rk off the hook though!

Phil Chapman? Surely Phil Hodge?!! John is indeed a gent although I think you ended up with something less out of the ordinary than when you started - can't help feeling that the original board you had would have done all you wanted if noseriding is "hardly the point of the exercise" - to end up with 22.5 wide and 16" nose is hardly out of the ordinary is it? Just saying.

Yeah phil hodge it is!

Well assuming you haven't seen or ridden both boards....... Let me clarify.

Hanging ten is not the point but being able to noseride at least a little is! Otherwise why not have some kind of midlength? The old board would noseride just but it was really very extreme and felt more like a stretched out shortboard which wasn't what id paid my hard earned for.

The new board is still very different from what is being made by most shapers in this country without being a longboard gun which is what the old board essentially ended up as. I might add that a couple of nationally recognized longboarders had ridden the gato and were of the same opinion as me.

The new board is (&this is the point) much closer to the gato model I thought I had ordered.....

Thanks for clearing that up. I was wondering why I got a name check on here! -Phil Chapman.

Sorry too many phils!

CP, thank you for posting this and the original post as well. i'm sorry that you had to go through such a mess to get something similar to what you ordered. if it's any consolation at all, you've turned one potential customer of Gato Heroi's into a non customer. Thanks for the information to keep the rest of us aware of potential pitfalls. Again, sorry to hear of your frustrations. For him to blame it on a LACK of hashish really sad on multiple levels.

Thanks. I tried to be really objective and balanced in my comments and hopefully that came across. It's a shame really because i think a lot of rk's ideas are interesting and relevant and do work but he's not the best ambassador for them. i think if you can buy a GH off the rack or one off the computer finished by evan or John you'd be fine.

The squire is a really fun board, not for everyday but when there's some shape, even if it's tiny. Noserides feel more hard won and give a bit more satisfaction dare i say and there's a great satisfaction in jamming a full railed cutback after retreating from a delicately placed 10!