one day in woolacombe 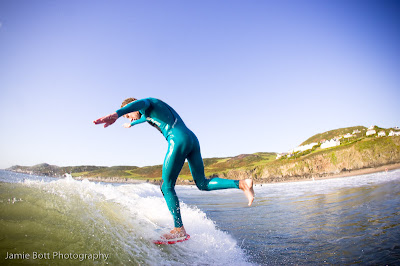 I can guess what you are thinking....."nice wetsuit"
Well bright is coming back, or so we're told by the people who decide these things! Thats a shot of the very talented James Parry, at the north end of Woolacombe while filming for One Day
Richard Gregory aka wavedreamer has been working on his "One Day" concept for the last couple of years. It's finally taken the form of a series of short films, all shot over a twentyfour hour period at a single location, set to a soundtrack that was recorded in twenty four hours too. Not like he wants to put himself under any pressure then!
Intended to be a celebration of surfing in this country, the first film was shot on a lovely sunny day, a few of weeks ago and will be out on dvd this winter. We were blessed with a small clean swell and plenty of people made the effort to be there in front of the cameras. There was some great surfing going on & given Rich's perfectionism & eye for a good shot, i have no doubt the finished product will be a really great piece of surf cinema

Check the trailer below

I recently interviewed Rich for Drift and it should be up on their site a little closer to the release date so keep your eyes open for that.
Stay up to date with what's happening in one day world here
awesome water shot taken two thirds of the way through THE day courtesy of the legend that is Jamie Bott
Posted by CP at 08:44

Some really inspiring surfing in that little movie clip. I couldn't access from this site, but found 'One day' on another.

Hey if you think that's a bright wetsuit check this out:
http://surfingnorthdevon.blogspot.com/2009/11/1980s-gul-wetsuits.html