Well the wind is offshore....... but it's so strong it's blowing anything resembling a wave back towards New York and it looks likely to stay that way for a few days at least. The weekend was a different story: 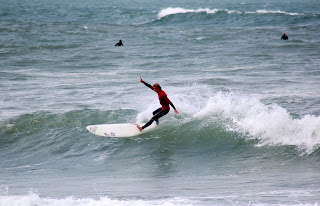 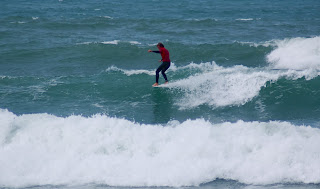 Saturday saw the second British Longboard Union contest held at Saunton. Day one went down in typically onshore contest conditions (made me feel even more smug at getting a clean surf out of the wind around the corner) but Saunton turned on some classic 2 foot waves for the semis and final on sunday. While I am not a great fan of progressive longboarding as a concept,  no one can deny there are some good contest longboarders in the UK at the moment.
Ben Skinner won by a narrow margin from local hero Ben Haworth (pictured), ladies favorite Elliot Dudley was third & South Devon ripper Ben Howey was fourth.