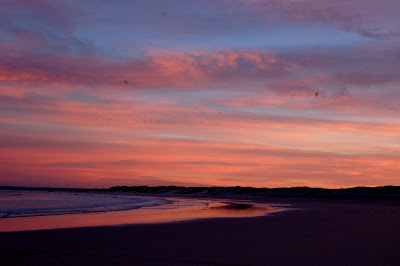 I must admit to being almost childishly excited to see my words in print in a paper magazine for the first time. Corduroy Lines issue 12 is the august publication responsible for my excitement. The magazine is still available from their website
I've held off publishing the full text on here for over a month as a courtesy to them but for those unlucky enough or too far overseas to have a copy here it is now. Ironically, since i wrote the piece we have had a single event "world longboard tour" in Makaha take place. Once again sponsored by Oxbow, shockingly they couldn't manage to provide a live video feed like the other major asp events. Once again a clear illustration that longboarding is the poor relation. It's almost a chicken and egg situation. Lack of decent coverage leads to lack of exposure for the surfers and their sponsors, which makes the surfers less valuable to the brands and the brands less likely to invest in longboarding.
That said, i did make the effort to follow the scores and watch the heats on demand and from a personal point of view came away saddened by what i saw. It's probably well known i'm not a big fan of progressive longboarding and to my eyes many of the waves looked like pedestrian shortboarding. Noseriding, which is surely the thing that defines longboarding as being different from other areas of our sport, was almost an afterthought on many of the waves. Yes i know it's hard in bigger waves but from my viewpoint maybe that questions the relevance of running a longboard contest in such conditions. Several "world class" competitors seemed to struggle to hang five with toes properly over the nose, let alone ten. Worse was the shock realisation that you can make the semi finals of the world title event shuffling to the nose and back rather than cross stepping. It's a world away from the surfing i fell in love with.
Style it seems, at least in contests, is dead!
Right, step away from the soapbox!
HAS LONGBOARDING LOST IT"S IDENTITY?

The one issue you didn't cover here is that a progressive 'longboard' is actually only a 'longboard' because it's 9'0" (or over).
It's the argument about the right equipment for any given swell.
Progressive longboards have there place,..only call them what they are,...'Midlengths'. Once this shift happens the competitions will hopefully catch up and the riders can take 12 inches off (or even more), ride them in hollower waves than one would want to take a log into and score points with even more progressive maneouvers. Less swing weight.

Seems to me the riders need to take control of the competition rules.

Here's my hypothesis: First you have the tour style events. Thruster driven. Zoom.

Then,...An 'everything else' catagory,..or an 'open' type competition that has enough flexibility to allow the riders and judges to decide the length parameters at the beach on any given swell.

Riders,..bring your quiver and be prepared to be judged over a season riding different categories of board. Surely this would reward the best a 'surfer' over the year?

(You could even expand this set up to include shorter boards although this might be a tad controversial???)

Nose orientated maneuvers could still count in the midlength categories,..we all throw a few cheater fives from time to time, but for the days when there's a small swell we could see the doors open again to the Style and grace of 'the dance' on the type of equipment that gave birth to it.

After all, isn't this is why we have quivers and love riding different boards.

playing devil's advocate though, if you're going below 9 feet and judging on turns in heavier waves, surely you could argue that the regular shortboard scene displays the most radical turn based surfing in the heaviest waves. That would make the midlength genre akin to monster racing trucks....slightly pointless!

The basic premise that you you should be able to walk to the nose, and walk back from the nose ought at least to count for a 'point' in a longboard contest.
Putting your arms in the air, with one foot in front of the other somewhere near the nose, shouldn't count as a 'hang five' or a move of any sort.
I agree with Chris, if you want to see radical surfing - tune into the WCT and see how it's done properly with style & grace.
'Longboarding' is just one form of surfing & it doesn't need to ape what people on other types of equipment are doing. Period.

It's not just the nose, it's pretty much the entire front half that's narrower.
Gutted for you, Deal or No DealKirk Sanford