Stolen from Alex Swanson and the excellent ten piggies over blog. I could do with a few more sunny offshore waves and some warm water. Is it me or is the sea still cold this year?
Posted by CP at 08:00 1 comment:

get in the van Finally finished the film that i took in the holga up to the lake district at easter. Not sure if i posted much about the trip before but what a beautiful part of the country! There aren't many places in this country i could imagine living but cumbria is now on the list, assuming i could cope with the seperation anxiety from the beach. The scenery really is breathtaking and there's a real "active" feel to places like Keswick and Ambleside, makes you feel like you want to get out walking or on a bike.


Like most of our trips away, we drove miles exploring, "up and down dale" as they say, through steep narrow roads and up close and personal with errant sheep and some dry stone walling. In fact just millimetres away from explaining "aggressive livestock damage" on my van insurance claim form!


I took plenty of photos but in typical toy camera fashion, only a handful came out. This one is from Fellfoot park boathouse on Lake Windemere and you can't see how heavily it was raining from the shot but it's a good job the camera is purely mechanical and therefore showerproof! Most of the rest of the roll (including some shots that i really liked the composition of) ended up wrecked, i think purely because it was expired film. Thats what you getb for trying to be all arty and clever! Frustrating but i guess it's all part of the "fun" of these things!
Posted by CP at 11:08 No comments: Funny how a view that most members of the public would see as calming and something to sit still and soak up has the absolute opposite effect on us. That can't get your suit on fast enough excitement, a flurried burst of hectic activity slowing only when you make it out back and float waiting for the first set to roll through! 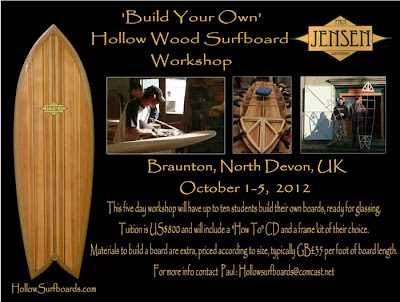 Paul Jensen is considered a bit of a legend in building hollow wood surfboards and it seems like he's going to be over here in october running a workshop.

I don't know much about this but i do know Paul is supposed to be a great guy and a real craftsman and this will be a great opportunity to craft a beautiful, functional board........... if you have seven or eight hundred quid to spare!
Posted by CP at 08:30 1 comment:

In a nutshell, this is why i love surfing in California. Sun, sunsets and glassy peelers, artfully recorded by Jack Belli who is a super talented photographer and runs a rad little blog here
Posted by CP at 09:00 1 comment: could it be magic? Most people will be familiar with the concept of having a "magic board". It's a much used phrase in connection with the ASP world tour and most surfers will feel like they have owned one at some point over the course of their surfing life.

The board in the picture above is one of mine. I pulled it out of the shed the other day and paddled out on it for the first time in ages. Sure enough, once i'd dodged the crowd enough to slide into a head high reeler, my feet found the sweet spot and i started a session full of smooth carves and cutbacks that only a true twin keel will give. Although the design has moved from being "new" (again) into being almost a standard "summer shape" they really are versatile boards and will handle most things the UK can throw at you.

This one is a 5'8 classic keel shaped by Larry Mabile that i brought back from the US four or five years ago (back in the glory days of $2 to the pound!). It's got a more 70's influenced template and bottom contour than the heavily concave bottomed ones that the likes of gulfstream and christenson make.  Larry is not that well known world wide but incredibly well respected around san diego and is one of the best fish shapers you could go to having learnt his craft under Skip Frye at the G&S label many moons ago. He also makes a lovely version of skip's eagle gliders but i think even virgin would baulk at flying one of those back!

I can honestly say i've never had a bad surf on this board, ever! In fact from where i'm typing it is the first "magic board" i've owned. The Bar of soap could be the second, but i digress....... It got me thinking about how much of the magic is in the shape and how much is in the eyes of the beholder? I mean how much of my love for it is in the fact that it suits me, my surfing and the waves i surf beautifully, how much is in the foam? Would it be magic for anyone, everyone?

Proponents of moulded or computer shaped boards will rave about how the technology allows mass production of a perfect prototype with all the flaws ground out by testing but it isn't entirely true since either process only replicates to a certain level of accuracy and the hand finishing, whether by surfer or chinese labor is still influential. In fact, i've heard quite a few people voice the opinion that it's the imperfections in a hand shape/ finished shape that will make a board magic and another of seemingly identical shape a dog.

For the record my fish was a custom order of a "model" Larmo has made for years, i have no idea if a computer was involved!!
Posted by CP at 09:00 No comments: Difficult to explain the fun to the uninitiated but much like handplanes, body surfing and surf mats, there's a lot of fun to be had from this most simple of surfcraft. Even on the messiest day they can provide some much needed saltwater based smiles.

The two in the picture are amongst the oldest surviving surfcraft in the country. The one with the slats across it was made from an old coffin lid and resides in the surfing museum collection.
Posted by CP at 08:30 No comments:

Stolen from the guardian website (which i never frequent you understand!) a nice little piece that gives a flavour of surfing around here with little cheese and genuine respect for the subject. Worth wasting five minutes on.
Posted by CP at 08:58 2 comments: