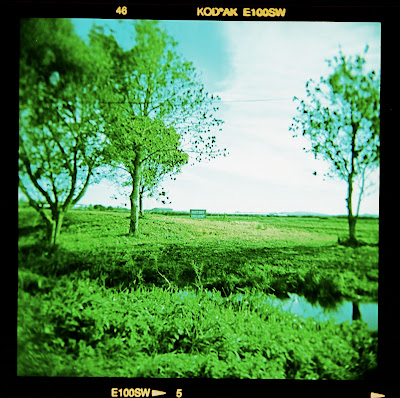 Just around the corner from the american road (so named as it's a remnant of WW2 military excercises) i sits this sign. It reads "Factory Effluent" and sat in the middle of a lush green vista, it's incongruity with it's surroundings made me pause for thought.

The shot, sadly, is a typical holga near miss, in my minds eye, the sign was a lot more legible! It's certainly not my best photo but if this truly rubbish run of "summer" conditions continues i am actually going to run out of photo's to post!

It's on the way back from a short mountain bike loop that BGA took me on. I'm sure he took some sort of satisfaction form watching me hyper ventilate up the hills but the rush of bumpy downhill single-track is worth it and a new pleasure i've been introduced to recently.

Meanwhile the ocean went from flat to howling onshore mess and as i type looks like it's heading back to flat again, while i heroically fought some kind of stomach bug from under the duvet. I hate being ill - i'm really bad at sitting still!

I did watch Steve Cleveland's new movie "Paradigm Shift" which runs along similar lines to his previous films. It's got some great surfing in it and some clever editing. Jai Lee and Dane Peterson probably have the best parts but Knost, Warren and all the other usual suspects are all present and ripping.

It didn't totally blow me away although that might be because i've hardly surfed at all myself recently and my stoke is at a low ebb. I think maybe watching it made me sad i'm not about to hop on a plane to california this year rather than get me excited about going surfing later as it usually would, which isn't Steve Clevelands fault!
It might also be because the progression in logging seems to have slowed a little - there's no new noseriding trick that i hadn't seen before, nothing really made me stop and rewind. The level of noseriding is now so high it's inevitable it will plateau a bit before the next climb.
I certainly can't put my finger on anything that's wrong with the film, so ignore me and buy it, you'll love it and i'm sure i will once the flat spell is over!

Jack Coleman's "Polyester" is worth a watch too especially if you're an Alex Knost fan. Be warned it is SUPER arty, all scratched painty super 8, weird angles and a velvet underground type soundtrack. It's reminiscent of early Volcom films and definately in the "art piece" category but a good diversion for half an hour and i really like it.

There's (pleeeeeeese!!!) a small chance of a loggable wave at this end of the week. If there's anything at all in the way of tiny clean waves i'm breaking the sup or a belly board out, i NEED some kind of sideways sliding action and at this stage i'm really not being choosy!

It's not just you - I watched "A Paradigm Shift" the other week and it left me flat. It's got all the ingredients I suppose but doesn't really lift itself: maybe I'm getting a little tired of seeing the same cast / usual supects. I really enjoyed "The Fantastic Plastic Machine" the other day - have you seen that? And Taki Bibelas' "The Still Point" is different and worth watching.

Has it got any mini simmons action in it? didnt see any in the preview??? THX
Jettyholic

Only a couple of tw soap waves but blink and you'd miss them!