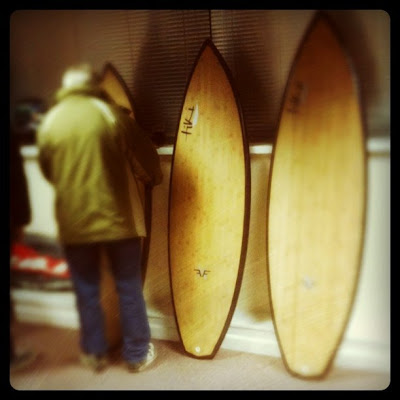 This week i spent a very enjoyable evening at the Tiki offices seeing them launch their new range of epoxy boards. In between being force fed real ale by Tim Heyland (who i now hold partly responsible for my worst hangover in recent memory!) here's what i remember........

The boards are the frutition of a five year design process and represent an attempt to push board construction forwards by marrying natural and manmade materials to create something with the best of both. The original shapes are by Bruce McKee, an aussie who has shaped for quite a few big names over the years and range from a 5'9 shortboard up to a 7 foot something fun board shape. There are a couple of fish style SUP's in the range too but interestingly no longboards. Tim, who is a very good longboarder himself, doesn't feel the technology gives the right feel to longer shapes and i think that's probably right.

Each board is machine preshaped then hand finished from a eps foam blank. The first "clever bit" is the use of a much much smaller cell and therefore denser and stronger foam stringerless blank. From there things get a bit hazy but..........

The blank gets a layer of glass then the deck and bottom get a thin bamboo skin and the rails get a carbon fibre cloth wrap. The deck gets another 6oz patch where your feet go and the whole baord gets another 4oz layer of glass over all of it. What you end up with is four layers of glass on the deck and the equivalent of seven layers on the rails, but, and here's the second "clever bit",  because it's all epoxy, the boards come out lighter than a conventional PU shortboard!

Aesthetically they look lovely and feel well made. They are strong enough for a well built chap to jump on upside down without damage. I can't comment on how they surf... yet, but i know they spent a lot of time testing to try and avoid the corkiness and tinnyness that surfttechs are often accused of. The bamboo apparently gives a dynamic flex that you wouldn't find in a tufflite board.

They're not entirely my "cup of tea" and others will be far more qualified to comment on how well they work but it's cool to see something new, especially when it's homegrown.
Posted by CP at 09:08