suction, self promotion and the art of noseriding... 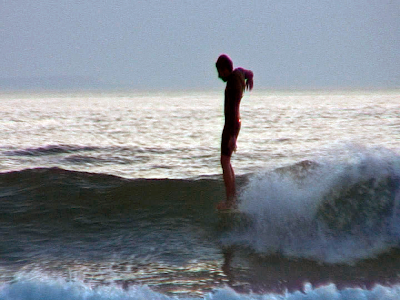 Issue 11 of corduroy lines is out now, click here to check it out. I wrote them a piece on the art of noseriding but (as i type this) the mag version has half the text missing (but not in an edited way) and the article makes less sense as a result. I'm sure it's an oversight on their behalf but the full text is below just in case......

The Art Of Noseriding


Magazines like this one are filled with pictures of surfers nonchalantly perched on the tips of their longboards. Yet to many intermediate surfers, standing on the front 18 inches of their boards can seem a daunting, almost impossible prospect.

In truth, noseriding isn't THAT difficult and is within the grasp of most people once you understand how it works. Like many things in surfing, it's difficult to teach people how to noseride, there's a lot of feel and experience involved and this isn't intended as an exhaustive "how to", more a list of tips from someone already in the know.

This isn't a specific noseriding tip, more a general longboarding one. Learning to cross step fluently is a major step to good longboarding. Not only does it look better but it is more functional too, allowing you to move up and down the board quickly and make use of the noseriding sections of the wave as they appear and disappear. If your water time is limited, learning to cross step on a long skateboard or an indo board can help a massive amount
You will notice that some surfers take two steps to the nose while some take four. This is dictated by the length of your legs and the length of your board, to begin with just go with whichever feels "right" to you.

Small clean waves are the ideal learning conditions. Although it's possible to hang five in almost any conditions, the bigger and messier the waves get, the more difficult it is. `Ideally  you want a lined up wave that has a long tapering shoulder- there's a reason the worlds two best noseriding waves (Noosa & Malibu) are sandbottomed points.

Sure some shapes make it easier to stay up there for longer but any board over 9 feet will let you noseride if you get the board in the right place on the wave.

Don't be afraid to fall off, just make sure you understand enough to only try and go to the nose when the time is right. Try and analyse your waves and note the differences between the waves where it worked and it didn't so you can concentrate on replicating the successes.

This is the biggest part of getting your toes on the nose!
In simple terms, when you stand on the nose, your weight is counterbalanced by two things

1) The upwards force exerted by the water rushing up the face of the wave and across the underside of the nose of the board. Wider noses and nose concave increase the amount of lift available

2) The counterweighting force of the wave breaking over the tail of the board. Look at some pictures of people noseriding and you will see that at least the back third of the board is sunk inside the wave. Having soft "50-50" rails and a convex "bellied" bottom in the tail encourage the water to do this. Tail kick also helps here as well as acting to slow the board down and hold it in the wave.

For a really solid noseride, no. 2 is the most important thing. You will see pictures of people perched on the tip where the suction is so great that the whole front third of the board is lifted out of the water. These things only happen if you position yourself in the fastest part of the wave, about two thirds up the face and as close to the breaking part of the wave as possible. The further away from this position you are, the more likely you are to nosedive or stall out of the back of the wave. Straight off your take off you can get in the right spot by fading towards the peak as you paddle in before standing and swinging back the right way. Once riding you can either stall the board and wait for the wave to steepen in front of you or cut back far enough so that the wave is already steep ahead of you as you bottom turn again. Obviously in a sectiony beach break style wave, the wave might steepen ahead of you naturally.
Once the wave is steep ahead of you, dont hesitate, go straight to the nose, the moment can be gone in a split second. Too many people wait too long and let the board trim too far in front of the pocket before they start to move. The board outruns the section and then nosedives as they reach the nose.
It helps to think of starting to walk forward as the board begins to climb the face after you bottom turn so that you arrive on the nose as the board reaches trim, rather than trying to move forward once at the top of the wave with the board already starting to head down the face. Weighting your inside rail helps too. In fact when on your backhand it often helps to have your heel quite a long way across the stringer towards the inside rail.
Unfortunately, knowing exactly when is the right time is one of those "feel" things that takes experience to fully master but trying to heighten your awareness of what is happening on each wave you ride as mentioned earlier speeds up this process.

Don't worry too much about where your back foot is to begin with, just make sure your front toes are properly dangling over the tip. Anything else is just forward trim.

Once you're up there, it's easy to freeze then fall as the wave breaks or stall out of the wave. Often the section will only support you for a short time. Once you sense the board start to slow down or drop down the face, step back, cut back and set up again.

There are lots of good logging films and plenty of clips on you tube. When you watch them, analyse what the surfers and waves are doing. Watch waves that show the surfer setting up the noseride. Pause the action just before they go to the nose and look at where they are and what the wave is doing around them. Try and visualise how the wave looks at that moment from the surfers point of view.

Once you become adept at hanging five you'll notice that there are some times where the board feels much more stable and "locked in" compared to others. This might only be for a split second, especially in beach break style waves. These are the moments when the time is right to move the back foot up to hang ten or kick it out into the wave face or hang heels or lift it up and hold it while you stand on one leg! Only feel and experience can help you judge the moments it will work but you can practice the balance needed for the moves over an over again on a long skateboard. Then when you're in the water, you're only learning how to get set up properly not trying to improve your balance as well. This is something i found really useful when learning to hang heels.

- Most of all, have fun with your surfing, after all thats why we all started in the first place isn't it?


I should also mention that Tom Wegener had an article in an issue of pacific longboarder about 8 years ago that greatly contributed to my understanding and influenced what you see here. I think it's still available to read on tomwegener.com

Pic is from Woolacombe a couple of August's ago, shame it isn't this warm all year round!
Posted by CP at 14:03

Will be putting this to the test very soon! Honest!

I hate it when people say that only skinny little kids can noseride. I myself am 6'3" and close to 200lbs and can noseride just fine. its all about positioning, feeling and a lot of practice. Not to say a good wave and board don't help; but you can really noseride anything if you know what your doing.

Nice article. I read it in CL11. My board also makes an appearance in that issue - hanging from the wall in the last article!

See you out there.

Very good ! I like reading your surfing experience this time. Thank you for sharing your experiences and knowledge about holidays and surfing. odysseysurfschool.com