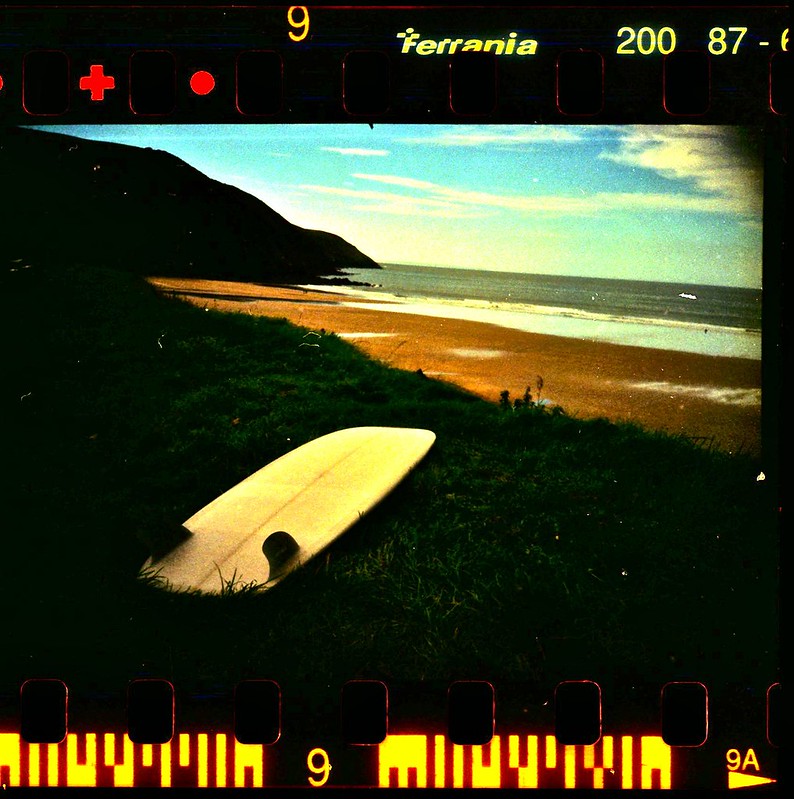 I wrote this piece a couple of years ago but for a variety of reasons it didnt get published on Drift straight away, mainly to do with getting some decent pictures for it what with Drift being a very picture heavy format. Drift the went into hibernation and Howard has just sold it to the french guys behind extreme video so that chapter of my surf musing is well and truly shut now.

I kinda feel bad for Rudy that it never made it out there. We worked hard on it and Rudy is a really creative nice guy. His dvd is worth searching out if you can find it now and he still posts stuff on the web from time to time. I have a suspiscion that there will be another chapter in the avthentic story.


The surf media in general portray south west france as a place of topless bathing, sunshine, parties and thumping beachbreak barrels and it's true that parts of it are inextricably linked with the American corporate surfing dream and the selling thereof. It's not the whole story though.

Away from the ASP circus that descends every autumn and the corporate headquarters of quikcurlbong, there are grass roots, sunk deep and growing for years. There is a heartfelt and genuine, "authentic" surf culture filled with gallic flair every bit as valid as anything you're likely to see pushed in magazines from around the world.

Rudy Jacques is a frenchman with saltwater in his veins and a heart captivated by surfing. A man who has revelled in this unique culture and felt compelled to record it as he sees, lives and breathes it. His work is a window on french surfing in it's most authentic homegrown sense. Building on the success of his art and photography shows, this Autumn sees the release of his film "the avthentic story"

What's your surfing history, how did you get into it?

I grew up in Ile d’Oleron, a small island on the Atlantic Coast of France. I was surrounded by the sea so it was inevitable i developed a relationship with the ocean, whether it was surfing or swimming or gathering seashells with my grandparents. I started bodyboarding because it was cheap and so much fun and I spent several summers standing up on it and trimming. My parents were not into surfing but they bought me a very thick red-green-yellow fluo 6”2 thruster that my friends were happy to laugh about. That's pretty much how I got into surfing.

What drew you to the more alternative side of surfing, away from thrusters and the world tour?

I used to surf thrusters all the time but I was not very good at it. A friend of mine let me try his longboard during a summer, it was in 2002 or 2003 I guess and I found it simple, elegant and way funnier. Most of the waves on Ile d’Oleron are perfectly shaped for longboarding. So I finally got my hands on a Jed Noll 9’0 a year later and used to ride it all the time. My dreams were made of 2-3ft left-waves, and they still are.  I love riding logs, i've been caught since the first ride.

What was the idea behind avthentic originally?

I've been into punk music since my teenage years when i discovered bands like Minor Threat and Fugazi. They were doing their own things, creating their independent label and refusing to do gigs if the entrance ticket was too expensive.  I thought it was the way it should be done. Do it yourself and accessible. So making clips or taking photographs or doing fanzines sounded like the real deal while creating Avthentic. I just wanted to document what we were doing in Oleron, bringing these values of integrity and dedication.

Does it have a message you trying to communicate to your audience?

Try to make the most out of what makes you feel alive.

what inspired you to start making a film?

When I was 16, I worked during the summer and ended up buying my first camera. It was in 2003. I started making short movies with my friends, writing scripts or doing introspective stuff. I spent hours doing the edit. It was terrible (literally very bad) but very entertaining!. I also did surf clips but it was nonsense. I reckon Thomas Campbell opened the path and his work helped me to focus on the right thing. I can easily say that I watched The Seedling and Sprout thousands and thousands of times. It sounds such a cliché but it is how it really started.

I questioned myself a lot. Is what I am doing right? I became aware that it was time to do my own thing. The best way to show my gratitude to people who influenced me was just to be honest. I worked a lot NOT to get rid of my influences but to use them appropriately. So I started filming for The Avthentic Story because I had something to share and something to say with my own words, with the same low-price camera I bought in 2003 until it fell in the sand.

It has been tough to see this project through to completion. I have been in Paris since 2007 and have gone back to the coast only during holidays. That is why it took me so long to film, from 2007 to 2011 actually. I went through different states of mind. I was about to stop everything because I became disgusted by the neo-retro-classic hipster stuff. People were arriving and calling themselves artists and neglecting the legacy of the people who were there before. I was afraid of Avthentic being assimilated to that. I wanted it to be humble and simple and made with nothing else than passion, paying attention and expressing gratitude to the originals.

What is your vision for avthentic now, is it a brand, an art collective, a hobby or a career?

It is a pure hobby. I don't want it to be called a brand because it would mean objectives and financial expectations. I do not want that, I do not want to take a picture and to feel the pressure. Maybe it will change when I lose my real job or when I have mouths to feed but as for now, it is all about having fun in doing what I love.

you work in several media, film, analog camera's, spray paint, all "basic" or "old" technologies, why choose them?

Because everything is mechanical and built to stand the test of time. I use a point and shoot Minolta camera for lifestyle scenes and a Canon AE1-Program with a 400mm lens for surfing. The Canon body was the first gift my parents bought themselves together after they got married. It's not disposable, it is a piece I am proud to have in my hands. To go a bit further, more and more people are riding plastic boards with no history, like something you buy when you need it, something you throw away as soon as you used it. Some people are happy to call that Progress.

has it been a struggle to get help to bring your work to a wider audience?

It's not been a “struggle”, I mean I don't have targets in mind. Of course I would be glad to know that a lot of people are interested but I'm at a point that I need to do this firstly because it is visceral. It's something I need to do for myself not for other people. There are no compromises. Avthentic would rather be dead than sold out.  If other people connect with that then that's great.

where do you find inspiration?

My friends Clovis Donizetti and Steven Dunn Videau. I would have done nothing without them. They just surf the way I would like to be able to, with style and simplicity. We recently had a session in South West France with guys from England, James Parry, Michael Lay and Matthew Jackson-Travis. They were ripping and having so much fun, sharing waves and doing high fives. That encounter was an inspiration.

There is also one person and his family that I would like to thank more particularly for his influence, filmmaker and humble father Nathan Oldfield. He welcomed me at his place while I was in Australia and I was blessed to discover the other side of the picture. I remember being so moved when he showed me the room where he edited Lines From A Poem and Seaworthy. His upcoming movie The Heart & The Sea is coming out this year I guess, and yes this is what is exciting in surfing at the moment.

Who are your favorite surfers?

Right now, I am into Matt Howard’s stuff, both surfing and filmmaking. My friend Clovis gave me Let It Flow and The Embryo of Fineflow, two logging movies from the late nineties with Joel Tudor, Jimmy Gamboa, Brittany Leonard and Tyler Hatzikian to name a few. They are genuine without this recent classic-retro vibe, they were just living the original thing.

what's it like surfing in france compared to other places you have traveled?

Australia was my very first trip, my real travelling experience so I don't have enough detachment and background to compare many places. I can just say that I digged the energy at Byron Bay.

Do you want a funny anecdote? I arrived alone at 6 in the morning after 13 hours of train and bus from Sydney. It was raining heavily and I had no place to go. I walked to The Pass with my backpack and my fins. It was beautiful but dramatic. The point seemed far but I caught sight of surfers. When I got closer, I saw a young guy doing 360s with his finless board. He was so smooth and stylished he was flowing as Derek Hynd does in this Youtube video. I finally arrived at The Pass. It was still raining. I grabbed my fins to go for a swim, took a wave and hit the sand with my nose. I just got my head out of the water and saw the young guy, who actually was Derek Hynd. Despite my bloody noise and seeing bush turkeys eating my bag, the session suddenly became remarkably beautiful.

where are your favorite places in the world?

No place feels better than home to me. I left Oleron a few years ago in order to go to Paris to finish school and to find a job. I just hope to end my days on the island, with my sweet love Aline, my family and my friends. When I am there, I need nothing else.

Any people to thank for help along the way?

Sure, I want to thank you Drift a lot for giving me a say. And all my thanks to Dunn, Clovis, Cyril from Tamarindo Surf Shop and Jibi from Wallako, my family, my friends in Oleron and the ones who will stay authentic.

Rudy's new film, The avthentic Story is available now through www.avthentic.com. It's really rather good!
Posted by CP at 08:25