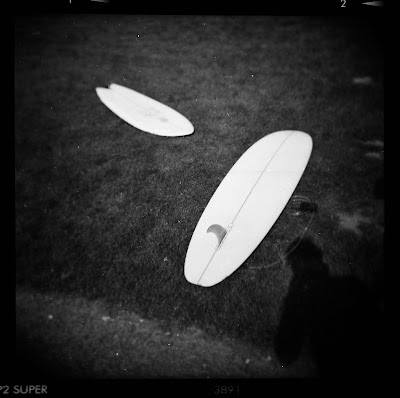 Those of you who actually read my ramblings will have noticed a common thread to my choice of surf craft. Personally i believe style is all important in surfing, i don't care how radical your turns are, if you have an ugly style i'm not interested. Having been initially drawn to the style inherent in traditional longboarding, once i started to experiment with shorter boards i looked for shapes that would still allow a smooth flowing style, one that works with the wave, rather than trying to beat it into submission.
When i'm trying to explain it to others i often term it like this: Conventional shortboarding is all based on getting vertical, drawing very "up & down" lines on the wave. The surfing i'm into is based very much on drawing more flowing lateral lines on the wave, heavy single fin logs on small waves, two and four fin fish on bigger waves and lately, the ultimate lateral trim machine - the displacement hull.
Some of you will relate to that, some of you will think it's boring surfing. Thats cool, each to their own, the world would be a boring place if we all liked the same thing.
Posted by CP at 08:24

Well said, totally with you on that. Cruisey beat aggressive any day

For as long as I've surfed (over ten years now) I've struggled with the vertical and always felt more natural with, as you said, the lateral line. It just makes more sense to me. It's nice to hear someone else put into words, what feels normal and so good to one'self. Nice work.

Not sure what you're talking about wisht hound, one of those is your board! :-)

Hi Chris. Tim Mason from Perfect Trim suggested that I contact you to get your thoughts on the pros and cons of hull usage at Saunton (suitability to wave etc,). I'm 15 stone and mainly surf the left. Tim recommended at least a 7'8", what do you think ? Cheers, Tom.

I'd take Tim's advide, i pretty much left it up to his judgement dimension wise. I am under 10 stone and mine is a 6'10. It's a bitch to duckdive but paddles & catches waves well, though the hulls have a slightly different feel to paddle and take off.

Mine goes great at saunton, makes some ridiculous sections with it's trim speed and drawn out bottom turns. I am regular and it is awkward to surf on your backhand so i haven't gone left on it a lot but if you are goofy i would think that lined up hi tide left into the corner would be super fun as you are often racing the lip on that and thats what the hull excels at.

I've had some really fun waves at puts on it too. Hope that helps!

Thanks for those sage words Chris. I'll be on the lookout for a skinny regfooter going right in a butttery fashion, next time I'm out.